Although the Village of Waunakee has an ordinance prohibiting livestock, Gen Mallin really wants to raise chickens.

So the 10-year-old’s immediate neighbors in Meadowbrook have all received letters informing them about her wishes, and they may soon see a homeowners association meeting on the topic.

Gen hopes to gain their blessing, paving the way for the matter to be considered by Waunakee’s Plan Commission, she said.

Gen really likes chickens. She discovered this passion while her family was still living in Westport, and a neighbor bought chicks that she fostered.

“I wish I could have kept them until they grew up,” Gen said. 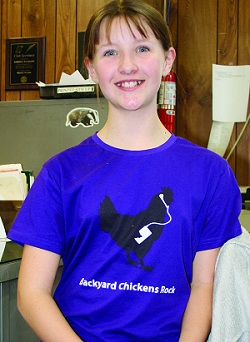 She’s pored over the Chicken Chick’s Blog and learned about raising backyard chickens and their breeds.

With four to five chickens, the coop “wouldn’t have to be gynormous,” Gen said.

Gen has researched other Wisconsin communities that permit backyard chickens, along with the types of coops and runways that keep hens completely contained.

The Wisconsin cities of Madison, New Berlin, Fort Atkinson, Neenah, Jefferson and Sheboygan all allow between four to six backyard hens, depending on the municipality’s ordinance, according to Gen’s research.

Gen is proposing the village change its ordinance to allow four to five hens per household, with no roosters.

The ordinance would require the hens be contained. It would give the village the authority to revoke a permit from chicken owners who do not keep up the coop, exceed the limit or fail to follow other specified requirements.

Gen spoke before the village board, then met with Village Administrator Todd Schmidt and Public Works Director Kevin Even, who directed her to talk with the neighbors. And she sent a litter to the editor that was printed in The Waunakee Tribune.

Gen said so far, the feedback has been mainly positive. The negative feedback has come mostly from people who aren’t knowledgeable about raising backyard chickens, she said.

Some have raised concerns that chickens need roosters to produce eggs – a common misconception. Roosters are needed only to fertilize eggs for reproduction. Hens produce the eggs on their own.

Other concerns have been about chickens running around backyards. Gen said the ordinance could require the hens to be kept caged in a coop with a runway.

About concerns regarding odors, Gen said if the coop is kept clean, it should be odor free.

“It’s smelly only if you really neglect the coop,” she said, adding that coops are now manufactured to be easy to clean with removable roosts that can be washed.

Gen has already picked out the type of coop she would like to have with a ramp to the fenced in runway.

Her mother, Elise Mallin, pointed out that the backyard coops are actually smaller than swing sets.

Her daughter has done so much research, Elise believes Gen could actually take care of the chickens on her own, she said.

Though many look forward to owning chickens for the eggs, Gen seems more excited about having them as pets.

Gen has seen videos of chickens that have been trained to ride a skateboard, she said, adding she would like to teach hers to dance.

“Most of all, you want them to be real friendly,” her mother added.